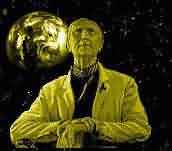 The current state of affairs in Australia - where we have a government that refuses to accept the scientific evidence of climate change, that undermines that science and climate scientists whenever it can, and that is now dismantling the only proven method to effectively manage carbon emissions - made me think of a scientist who presented his government with another inconvenient truth.

The great psychohistorian Hari Seldon, from Asimov's Foundation Trilogy, used his science to predict that Trantor, the seat of galactic government, would fall and that the fall was inevitable, but that he and his fellow scientists could work to mitigate the effects of that fall on the population of the empire.

Chen said, ‘Dr Seldon, you disturb the peace of the Emperor’s realm. None of the quadrillions living now among all the stars of the Galaxy will be living a century from now. Why, then should we concern ourselves with events of five centuries distance?’

‘I shall not be alive half a decade hence,’ said Seldon, ‘and yet it is of overpowering concern to me. Call it idealism. Call it an identification of myself with that mystical generalisation to which we refer by the term “man”.’

‘I do not wish to take the trouble to understand mysticism. Can you tell me why I might not rid myself of yourself and an uncomfortable and unnecessary five-century future which I will never see by having you executed tonight?’

‘The fall of Trantor,’ said Seldon, ‘cannot be stopped by any conceivable effort. It can be easily hastened, however. The tale of my interrupted trial will spread through the Galaxy. Frustration at my plans to lighten the disaster will convince people that the future holds no promise to them. Already they recall the lives of their grandfathers with envy. They will see that political revolutions and trade stagnations will increase. The feeling will pervade the Galaxy that only what a man can grasp for himself at that moment will be of any account. Ambitious men will not wait and unscrupulous men will not hang back. By their every action they will hasten the decay of their worlds. Have me killed and Trantor will fall not within five centuries but within fifty years and you, yourself, within a single year.’

Climate change is real. And the Direct Action policy will do nothing to meet the challenge of climate change. Do we really have to hope there's a wily Hari Seldon in amongst all the climate scientists who can bend the government's intransigence to his own ends in order to save humanity?
Posted by Keith Stevenson at 5:05 PM No comments: