Horizon is beginning to make its presence known and is now available for pre-order on a number of sites. So if you have a lazy $2.99, there are a few places you can splurge:

Also with the launch on 1 November, I'll be running a series of articles about the book, the characters and the science behind the story as part of the Horizon Blog Tour. Here's a rundown of the blog tour dates and sites and I'd like to say a hearty thank you to the wonderful authors and supporters who are making space available for me on their blogs.

So I hope you drop by for the blog tour!

Posted by Keith Stevenson at 7:08 PM No comments:

The books that stay with you

A few days ago, author Adam Browne tagged me on a Facebook post to deliver a list of the ten books that influenced me most. I don't generally go in for 'top tens'. For example I couldn't constrain myself to just ten favourite movies, but this list was a little different. From eleven years old and all through my teens I read voraciously. It was - looking back - a great period when I had more than enough time to sit around and read. One holiday I was pretty much reading a book a day! So the list made me think of those books I read as a youngster that I still think about today. I'm not saying they're all brilliant 'must-reads'. No doubt many of them have dated now but here they are.

Stand by for Mars - A Tom Corbett Space Cadet Adventure (!) - Carey Rockwell.
I found this book at a church fete. A hardback with spaceship design paper on the inside back and front covers and a few internal illustrations of our young space adventurer. It was pretty gung ho as you might imagine, but it was, I think, the first science fiction I'd read. Up to then I'd been into Armada Ghost Story collections and Alfred Hitchcock's Three Investigators. After Stand by for Mars, I was a goner. Anyway at some point I lost my original copy but managed to find another one a few years ago through Amazon.  I've since given that copy to my son. Looks like he's infected too now.

Foundation - Isaac Asimov
This is, of course, a no brainer. The archetypal galaxy-spanning space opera with a very clever idea at it's core: the science of psychohistory. I loved the book and the two that followed - not so much the later Asimov-penned add-ons or the ones that followed. The trilogy just feels so complete in and of itself. I also love the BBC Radio 4 adaptation, beautifully realised by some brilliant British voice actors and clever sound effects. In fact the thing that struck me about the radio play is how they could use Asimov's dialogue pretty much word for word.

The Man in the High Castle - Phillp K Dick
I've returned to this novel a number of times: a reality shifting alternative history that is also infused by Dick's particular ability to create the feeling of being misplaced and out of kilter. I read a LOT of Dick when I was growing up, and no doubt a lot of it didn't make sense to me as a teenager, but somehow I didn't seem to mind. I guess I knew I was reading something which had a frankness and a truth about it.

The Seedling Stars - James Blish
Another author I read a lot of growing up, and in fact it was a toss-up between including this book or his Cities in Flight quartet. The Seedling Stars is a collection of stories around the idea of genetic engineering of humanity to survive different alien environments. The concepts and the 'solutions' to the dramatic problems presented in the stories really thrilled me when I first read them.

Protector - Larry Niven
Another solid, ideas-based novel from a great writer. Protector imagined a whole other stage of human evolution that left us poor homo-sapiens looking like a bunch of dolts. It must have been as fun to write as it was to read. Niven was a big favourite growing up and I loved his Tales of Known Space, Ringworld and (a bit later) his Integral Trees/ Smokering books. It was the stuff of a young boy's dreams.

The Zap Gun - Phillip K Dick
More Dick madness, with typical themes of secret alien invasion set against cold-war paranoia and a fake war to feed the massive military industrial complex. Looking at the world today, you begin to see how prescient Dick was...

Norstrillia - Cordwainer Smith
The poetry, sheer invention and weirdness of Smith's work was instantly attractive to me, particularly coupled with an ability to create and conjure images of a vastly advanced instrumentality. And apart from all that, Norstrillia is a lot of fun; an insane coming of age story of a boy who surely has one of the oddest inheritances in science fiction history. Thinking back on it now, it's kind of like Dune but with more joi de vivre.

Tau Zero - Poul Anderson
Blish called it 'the ultimate hard science fiction novel' and he should know. Totally idea-driven and spanning the life of the universe. Mind blowing.

Time Snake and Superclown  - Vincent King
Probably not a lot of people have read this. It was published in 1976 and is a kind of psychedelic sci-fi adventure. Funnily enough io9 call it 'the most demented novel of all time' and it's certainly pretty far out there, though I was used to reading Dick so I just went with it at the time. Some of the imagery used has stayed with me since that first reading.

The Twilight of Briareus - Richard Cowper
This is a pretty frakked up story too. I guess I liked me some weird growing up. A near-future dystopia where the effect of a far distant supernova has doomed humanity. There's a strong Christ-like element to the tale and it's suffused with an overwhelmingly bleak feeling. 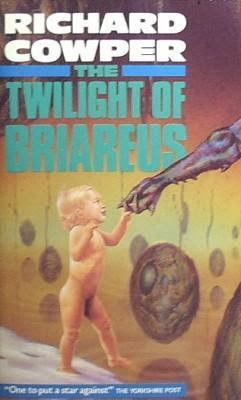 Posted by Keith Stevenson at 7:33 PM No comments: