As you’re lazing back in a daze of Christmas over-indulgence let me offer you something to knock you out of your seasonal ennui.

Dragon Wine Book 1: Shatterwing by Donna Maree Hanson is free in ebook for a short time. As part of spreading the word about her Dragon Wine fantasy series, Donna has stopped off on her blog tour to offer you the chance of winning a hard copy of Shatterwing. 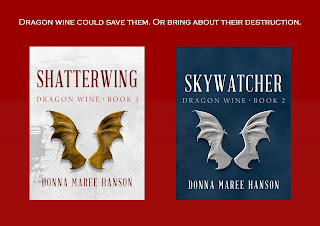 Winners will be drawn from people who comment during the blog tour. So leave a comment below to be in to win!


Dragon wine could save them. Or bring about their destruction.

Since the moon shattered, the once peaceful and plentiful world has become a desolate wasteland. Factions fight for ownership of the remaining resources as pieces of the broken moon rain down, bringing chaos, destruction and death.

The most precious of these resources is dragon wine – a life-giving drink made from the essence of dragons. But the making of the wine is perilous and so is undertaken by prisoners. Perhaps even more dangerous than the wine production is the Inspector, the sadistic ruler of the prison vineyard who plans to use the precious drink to rule the world.

There are only two people that stand in his way. Brill, a young royal rebel who seeks to bring about revolution, and Salinda, the prison’s best vintner and possessor of a powerful and ancient gift that she is only beginning to understand. To stop the Inspector, Salinda must learn to harness her power so that she and Brill can escape, and stop the dragon wine from falling into the wrong hands.

You can get your free ebook copy of Shatterwing right now by following the buy links to your favourite etailer - http://momentumbooks.com.au/books/shatterwing-dragon-wine-1/

And to further whet your appetite, Donna dropped by to answer a few questions.

Thank you Keith for hosting me on your blog today.

Can you tell us a little about the world of the Dragon Wine books and the people and creatures that live between the pages?

Shatterwing is set on Margra, a world that has suffered a cataclysmic event with the destruction of one of its moons. It was no ordinary moon as it had been held together by bands of power that had decayed overtime. Shatterwing is the name of the debris field which is all that is left of the destroyed moon. The locals call the race who had inhabited the world before them Moonbinders and this race has passed into legend. Humankind is on the brink of total collapse and law and order are non-existent with governments rising and falling in line with the meteors that thunder to the planet’s surface fairly regularly. Dragons inhabit the planet now after emerging with the falling of the moon. They are bestial creatures and humans hate and fear them. In a prison vineyard Salinda grows grapes near the dragon hatcheries using dragon dung. The grapes are used to make dragon wine and the magic, the life force of the dragons, passes to humans through the wine. Humans are not generally aware that they depend on dragons for their continued existence. The Inspector rules the prison vineyard, but he wants out of there. Salinda is his key to escape.


Elsewhere on the planet are Skywatchers, who use crystals to focus their magic to blow up meteors before they impact on the surface in the hope that they are saving humankind from destruction. The characters here are Garan, a Skywatcher and Laidan a young woman linked to the observatory. Beneath the surface is Nils of Barr, the last survivor of a race that coexisted with humans before Margra’s near destruction. He awakes from near on a thousand years of sleep to find the world devastated. Linking these people is Prince Brill and Danton who are rebels working for good.
Do you recall what made you first think about writing the Dragon Wine story? Was there a clear moment of inspiration that got you started creating this world?

The story of Dragon Wine came to me in different stages. I had the idea of Salinda and Brill at the vineyard and wrote it as a short story, but it didn’t quite work. The idea for Nils came to me in a workshop. I wrote a scene where he is creeping across the square in a squalid town. I believe I used that scene in the book. Garan and the Skywatchers came out of another exercise, probably years before, about life on a world where meteors rain down. I combined all of these elements with  lots of work on backstory and plot to weave them all together. I really liked how it all turned out. Dark and nasty but it hangs together well.

Are there more books planned in the series and have you mapped out how the series will conclude?

Dragon Wine was the first book and it was published in two parts, Shatterwing and Skywatcher. I’ve drafted the next instalment (Dragon Wing) and I know how the series ends (Dragon Wane). Getting the other parts published depends on demand for the books. But they will eventually be published in some form. I invested many years into the series and it holds my interest. I really want to see how Salinda, Nils, Brill, Danton, Garan and Laidan survive what’s coming, if they survive what’s coming. Basically I want to know if humankind is worth saving, which for me is what the series is all about.
Is it all dragons and shattered moons at the moment or do you have some other projects in the pipeline you can talk about?

Oh no! I am working on a number of things. I write paranormal romance under the name Dani Kristoff. I love writing that. It’s light and its fun and sexy and I feel like I’m testing out the boundaries of my writing. I have just submitted another paranormal romance to my publisher. I have Rayessa and the Space Pirates (Love and Space Pirates series) out with a sequel too. I am thinking of another one of those. I also spent an unproductive year for me working on drafts of a Regency romance and an SF romance. I hope to get these polished during January. I also have one YA steam punk novel looking for a home. And another YA book that I am going to polish when I collect the remainder of my beta comments. In 2016, I am commencing a Phd so I need to clear my writing decks so I can settle in for that. I’ll be writing a novel as part of the research degree too.

What do you see as a key piece of advice for beginner writers that want to break into the fantasy genre?

Go for what you love about fantasy, but make it different. Bring your own perspective to your story and world building. For example, I have dragons in Dragon Wine but I believe I have created something new with them, something that another author hasn’t done. My world building also has a strong SF setting and I believe that adds something different to the world too. It’s post-apocalyptic rather than medieval for example. It’s hard to do with fantasy tropes but it can be done.

If you could have dinner with a fantasy author (living or dead) who would you choose and why?

I’ve recently discovered Louis McMaster Bujold. I think her work is awesome. I’d love to meet her, to interview her and maybe not dribble into my dinner while we were eating. I have read (listened to actually), Shards of Honor, Barrayar and Warrior’s Apprentice, all SF stories. Then some reader friends recommended I try her fantasy series. So I started with Curse of Challion and Paladin of Souls. These books rocked. Shards of Honour and Barrayar rocked my socks because they had a romance, very light but powerful. The main character, Cordelia was able to have a relationship without giving up who she was. I thought the novels were feminist without being hard line about it. Cordelia does some awesome stuff that blew me away. Her fantasy series is so well written. It had depth without masses of info dumps and what she does with plot and character blows me away. If I learnt anything from reading her  it is patience and subtlety in storytelling. She doesn’t rush it. She takes her time. This probably is due to the style of when she was writing in the 90s. Not like these days where it all has to happen on the first page and wham-bam on every second page. I aspire to write something as good as what she’s done.

Thanks Donna and good luck with the rest of the blog tour.

So, if you fancy a print copy of Shatterwing, leave a comment below to go into the draw!

Posted by Keith Stevenson at 5:09 AM