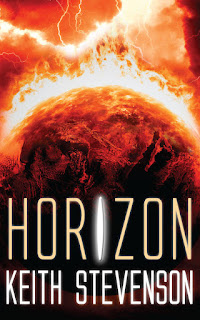 Get a free copy of Horizon when you sign up to Beyond, my bi-monthly Mailchimp newsletter for lovers of science and science fiction.

Get your free copy from BookFunnel.

You can see past issues of Beyond here and learn more about the book on the Horizon page.

Posted by Keith Stevenson at 6:55 PM No comments:

Email ThisBlogThis!Share to TwitterShare to FacebookShare to Pinterest
Labels: Beyond, Horizon

Ultraviolet - Blast from the Past

I’m not talking about Ultraviolet, the decidedly B-grade movie with Milla Jovovich, which is currently sitting at 9% on Rotten Tomatoes, but the rather excellent UK TV series from 1998. Here’s the teaser:

CJD. AIDS. Global warming. For the first time in history, mankind has the ability to destroy itself. So now vampires need to take control of their food source. Against this enemy, religion is no defence but folklore has some truth. Not wooden stakes but carbon bullets. Not garlic but the chemical allicin. Not simply daylight. Ultraviolet ...


So why was it so good? Well, it had an amazing cast …

… and an intelligent, modern take on the vampire legend. The vampires in Ultraviolet are ‘electronically invisible’. As Idris Elba’s character Vaughan explains: ‘Look, the only machine that can see or hear a leech is us. You can only see them face to face. No mirrors, no photos, no videos. Audio’s the same. He can make a call, but his voice won’t go down the line. Surveillance is a bitch.’

Over six episodes, a secret organisation of vampire hunters funded by the British Government and the Vatican try to find out what the vampires are planning for mankind who are, after all, their food source. Why are they bankrolling research into leukemia; what about synthetic blood; and why are they so interested in climate change? Even though the show is about the undead, it features strong SF concepts right down to the guns fitted with video screens to confirm potential vampire targets.

The writing is also a perfect lesson in showing not telling. From episode one, we’re thrown right into the action. Nothing is explained and the word ‘vampire’ is never used, but we discover the world and its threats through the evolving action. The characters are also really well-drawn (and acted). Jack Davenport’s Detective Mike Colefield is ambivalent about the organisation’s tactics; Idris Elba’s Vaughan is driven by revenge after what the vampire did to his army unit; Harker’s Angie Marsh lost her husband to the vampires; and Quast’s Father Harman is worried about his own mortality. Through the series, all the characters reveal strong arcs; they all want something, which is ultimately denied them.

Even with such a short run, the show finishes on a satisfying conclusion, although there is a possibility the story could continue. That never happened. The show’s creator Joe Ahearne ended up writing and directing all six episodes (not the original plan), which meant he was too busy with season one production to plot out where the story might go next. In an interview a couple of years later, he said that he’d fought hard to bring the story to a final conclusion because they had no guarantee of being renewed. You have to admire his integrity for doing that.

In 2000, an American reimagining by Fox Network, described as a  ‘sexy vampire soap opera’, made it to only one unaired pilot. So you can still enjoy Ultraviolet in all its self-contained and unspoiled glory. Order the DVD here. You won’t be disappointed.
Posted by Keith Stevenson at 9:31 PM No comments: