Up until about six months ago I’d only used Pinterest to show scans of 20th-century science fiction book covers, many of which I’d had since I was an early teenager, and as another channel for promoting my book reviews and my first novel, Horizon.

But as I’m creating the many alien beings, environments and spacecraft for the Lenticular Series I’m currently writing, I’ve realised Pinterest is a good reference source to help add detail to my imagination and I’ve started a visual library of material. I’m mining Pinterest to help me create new scenes and characters I’m adding during rewrites, and it’s really come into its own in helping me get an immediate fix on the physicality, speech patterns and psychological outlook of tertiary characters.

A case in point is the ruling political figures of the future Earth Hegemony and its various departments and bureaus. Here’s my current rogues’ gallery for this oppressive regime:

My characters aren’t direct representations of these actors. Rather, I’m trying to capture the essence of their performances that tie in with my ideas of who my characters are.

Similarly with settings: I’m currently writing a series of scenes that are set in long-abandoned underground tunnels, so pictures of similar environments help me imagine the look and feel of my tunnels more easily. I can add realistic details that I doubt I’d think of without a real picture to study.

Pinterest is becoming an indispensable writing tool for me. If you find yourself reaching for a sense of place in your writing, or you’re having trouble capturing a character’s essence, why not give Pinterest a go.
Posted by Keith Stevenson at 7:46 PM No comments:

Email ThisBlogThis!Share to TwitterShare to FacebookShare to Pinterest
Labels: Beyond, Kresz In 2006 our nine-planet solar system dropped to eight when Pluto was downgraded to a dwarf planet. The reason for the downgrade was the discovery of other similarly sized objects in the Kuiper Belt: a region of space extending beyond the orbit of Neptune to a point fifty-five times the distance between Earth and the Sun or, put another way, fifty-five Astronomical Units (AUs). The Kuiper Belt is where a lot of frozen objects hang out in fairly eccentric orbits, like Hayley’s Comet, which dives in and around the Sun every seventy-five years. But even though we’re busily discovering exoplanets around other suns light years away ‒ and may just have discovered our first exomoon ‒ questions still remain about whether there’s a ninth planet out there in the cold and dark, and maybe even a tenth. Two scientists at California Institute of Technology studied the movement of objects in the Kuiper Belt and worked out that something unseen was having an effect on the orbits they observed. Running the numbers indicated the rough size and orbit the unseen object would need: a mass ten times greater than Earth in an orbit 700 AUs from the Sun. They dubbed it Planet Nine, but no telescope has been able to find it yet. Oddly, the possible existence of Planet Nine in an eccentric and remote orbit makes our solar system more like others we’ve observed, rather than the strangely regimented planetary arrangement we’re used to. Now two other scientists from University of Arizona who observed different oddly moving Kuiper Belt objects are theorising the existence of Planet Ten, with a mass about the same as Mars at a distance of 50 AU. Again, no one has been able to catch sight of it. It’s weird that things so large can’t be definitively observed, particularly when their orbits have been inferred in fairly precise terms. Golden-age SF writers imagined Venus as a steamy jungle world filled with strange alien plants and beasts, but we know more about planetology now. Or we thought we did. Data from exploration missions like New Horizons and Cassini is showing that outer Solar System bodies are stranger than scientists have theorised. So when you think about Planet Nine and Ten, feel free to let your imagination run wild.

This article originally appeared in Beyond, my regular newsletter for lovers of science and science fiction. Subscribe at http://bit.ly/1Ec8HZQ
Posted by Keith Stevenson at 8:44 PM No comments:

Here's a pic of my single episode appearance (as a redshirt, of course). 😀 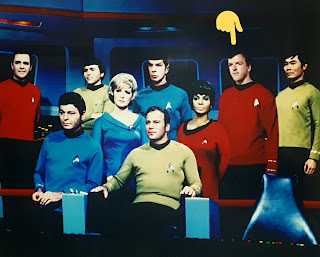 Posted by Keith Stevenson at 4:36 PM No comments: